What started off as a Halloween activity for residents at a Knottingley Care Home ended as a community sensation when their Facebook post went viral in Knottingley and surrounding areas in Wakefield. Residents and Care staff at Holyrood House, Spawd Bone Lane, Knottingley have been designing and carving pumpkins and a competition was announced. The pumpkins were a simple way for the residents to have a bit of fun and get involved with Halloween activities. When management struggled to pick a winner, the task was left to Holyrood House Facebook families, friends and followers.

The pumpkin image with the most likes would be declared winner. The homes fantastic creations have become hugely popular attracting more views from around the Knottingley and surrounding communities. The post and images of the pumpkins have also seen many positive comments, likes and shares from viewers left amazed by the pumpkin designs with many commenting the difficulty in picking a winner as all the designs were amazing.

The lockdown and visiting restrictions has meant from March this year the carehome has not been able to interact with their local community in the ways which they normally would. Residents and staff have missed their community get togethers so much that staff at Holyrood House have been coming up with different ways of keeping everyone’s spirits up including engaging with a company called Living Eggs who delivered 10 chick eggs in an incubator. Staff, Residents and Facebook followers watched as the eggs began to crack and the chicks hatched.

Holyrood House have a busy activities schedule with harvest, Halloween, Remembrance Day, Bonfire Night and of course the run up to Christmas and New Year. In preparation for Halloween, residents began designing their wonderful pumpkin creations and for fun it was decided to hold an internal competition.

“The hatching chicks created a real buzz throughout the home, hence one of the creations for the pumpkins was a chick design! The cockerels went off to pastures new and the four girls are now officially Holyrood residents”

“We were so amazed with the results that it was so difficult to decide the winner. The staff decided to let Facebook followers of Holyrood House decide the winner and we have been blown away with the feedback from our local communities. The number of people who have taken time out to like, comment and share our post has been amazing and it has been fantastic to share this with residents. We would like to send out a huge thank you to our fantastic communities for all their support during this year’s unpredictable pandemic period.”

“Well done to everyone on your fabulous creations. A brilliant idea for community involvement in these strange times.” 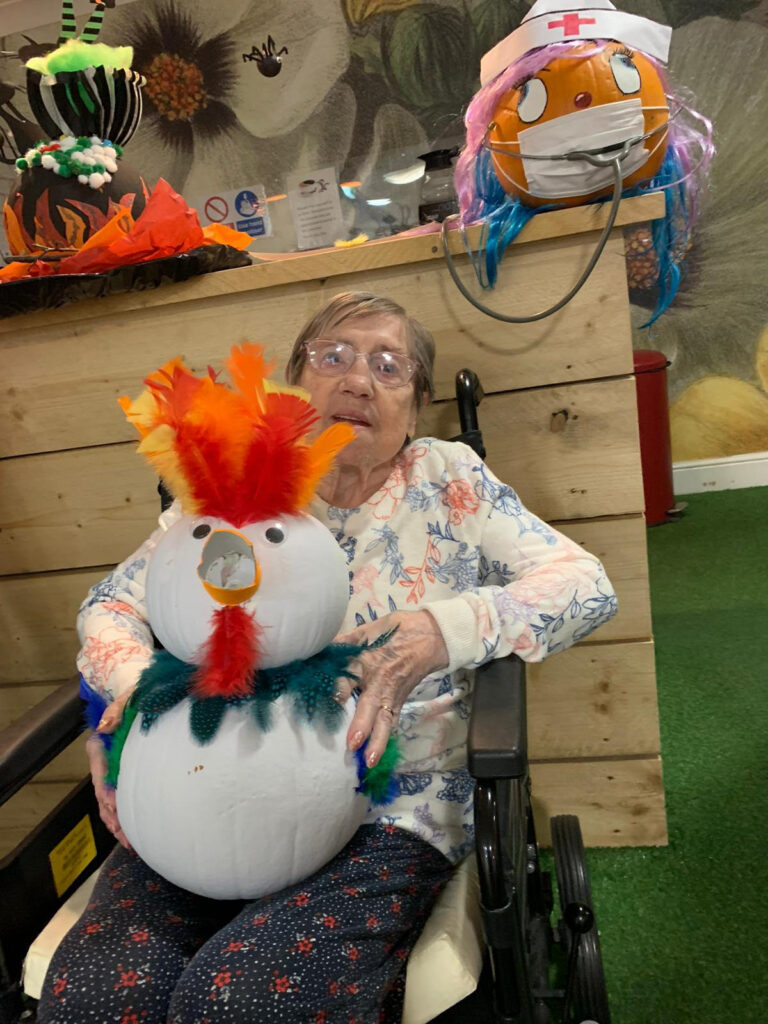